The Fourth Open Forum Town Hall Meeting, a civic space to highlight religious, social and other issues in Akwa Ibom organized by The AkwaIbom and Nigeria Dream Compass Series is sure to reduce/eliminate the blame game between leaders and citizens through intellectual cross fertilization of ideas for development. 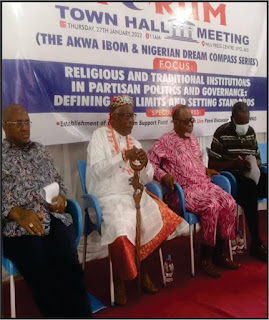 The focus of the 4th Edition of the Open Forum Town Hall Meeting was on, “Religious and Traditional Institutions in Partisan Politics and Governance: Defining the Limits and Setting Standards” received super analysis and recommendations made for the way forward.

Open Forum, an intellectual platform for dialogue, policy articulation and conflict resolution has dedicated itself to end the blame game through a monthly non-partissn Open Forum Town Hall Meeting where leaders and citizens converge and cross fertilize ideas for development.

The series is geared towards achieving the AkwaIbom and Nigeria Dream according to the organization’s coordinator, Dr Tom Ekerendu pegged on the premise that “it is no longer fashionable for citizens to blame leaders for everything wrong in the polity 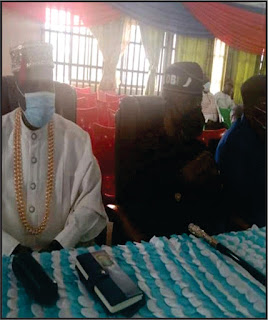 rth edition drew concerned AkwaIbomites from the religious, traditional and other class together to think forward for their dear state.

Chairman of the Forum Town Hall Meeting which was streamed online on facebook was Obong Bassey Inuaeyen, chancellor, Ibom Patriots and Elder Statesman.

It paraded an array of eminent special guests, principal guests, panelists, among others.

The event held at the NUJ Press Center, Uyo and was convened and sponsored by Citizen Matt K. Okono (MKO).