TEXT OF PRESS BRIEFING BY THE PRESIDENT OF THE IJAW NATIONAL CONGRESS (INC), PROFESSOR BENJAMIN OKABA, ON THE DESPICABLE ACTS OF LIFE-THREATENING POLITICAL VIOLENCE UNLEASHED IN IJAW LAND AMIDST CAMPAIGNS FOR THE 2023 GENERAL ELECTIONS HELD AT THE IJAW HOUSE, YENAGOA, BAYELSA STATE, ON SATURDAY, JANUARY 4, 2023.

It has been tales of neglect as hunger, want, anxiety trails internally displaced persons, IDPs, in the camps where they have been forced into by the now receding 2022 flood which has caused so much damage across the country with much heavier impact in the Niger Delta region.

Even though Niemeth warned repeatedly months before the flood came ravaging, the government, from federal to states, did nothing to prepare the people and put up measures to stem the effect when it finally came. The Niger Delta states especially,the areas around the bank and tributaries of the River Niger, are flood plains with reported projections of much of the regionbeing submerged by 2030, according to environmental research.

While in 2012 the flood impact was heavy, intervention was somehow coordinated, whereas, the current flood though expected, was without any mitigation plan. Consequently, displaced persons are facing a lot of challenges and high on the list is hunger. While they are cramped in their shelters, there are no mattresses or blankets, no mosquito nets or sanitary care;poor water sources and very little if any healthcare abound.

Pregnant women are unable to access ante-natal care, nursing mothers are not eating enough to feed their babies and lack essential items while the sick are not able to access healthcare.

In contrast, their Delta State counterparts from investigations, are faring better with even provision for the children to take lessons while in camp.

National Point visited some IDP camps at Abarikpo Camp and Akoh District Center on October 28 and observed that the IDPs there were facing serious challenges over feeding, sanitation, healthcare and worries over how to cope after the floods.

“Flood is not safe. The whole of Ahoada West is submerged. All the mud houses in Ubio have caved in because of the flood, the farms are flooded; no roof, no food. My people are suffering. Government should come and help us,” the traditional ruler said.

The flood took the people unaware. According to many of them, nobody warned them.

“I arrived this center on October 11, 2022. I have not seen much, no better treatment. They brought one bag of beans, two bags of rice, one big bag of garri, five tubers of yam. No saop, no water, no mosquito net. Women spread wrapper on the floor to sleep,including nursing mothers.

“Pregnant women are hungry, have no money and are unable to access ante-natal care.

“I want government to help us get out of this. We eat together and sometimes, mothers if they have extra, cook for their kids”.

A few cooking pots, none big enough for cooking for a large population were positioned at the entrance of the hall.

According to the IDPs many of their colleagues had gone when this publication visited, to attend a burial ceremony and by 5pm they would reassemble in the hall, a health center.

“We are suffering. Some mothers use carton as bed for new babies.” Ekiye Chika Joe told the visitors. He said the AhoadaWest Local Government chairman has visited twice as at Friday, October 28 and  brought to them, five bags of rice, three bags of salt, three bags of 100 kg garri and five bags of sachet water.

The people said they need frequent food supply to be able to eat each day, mattresses, mosquito nets and a standard water supply source.

The Abarikpo Community hosting them has only one functional mono pump making it difficult for all the over 300 IDPs there to bathe daily and the community shares from relief materials brought to the IDPs.

A worried father recounted that most of the women do not eat as there is not enough to go round.

“They are eating only pepper and salt, no fish. We are homeless, don’t know how or when we will go back. Our mud houses have fallen and need to be rebuilt before we go back when the water finally goes back. Bathing is a problem, government should come to our aid,” he pleaded.

An 87 year old man, Pa Robinson Anaw said to have one child,was lying sick on the only mattress in the IDP camp. He asked for attention from the Kebetkache health team busy attending to a long line of the IDPs.

Rejoice Gift, mother of six was with her two month old baby, Anabel. Mother and child had no mattress but were lying on a wrapper spread on the floor looking hungry and helpless.

Before the flood the farm was her source of survival but that farm now lies submerged. Though the baby feeds on the mother’s milk, the mother does not have enough food to adequately feed her neither does she have any money to supplement what the camp throws her way.

Another nursing mother, Esther Chigozie, mother of three has a two-month old baby. “Flood has carried all my farms. We need pampers, baby things, mosquito nets. I can’t care for my baby,” she cried.

Obuama Tom from Ebrass Community in Ahoada West Local Government Area was looking lost. He lost four farms and a fish pond to the flood.

“We need money to build block houses-two or three rooms where we can pack in until we rebuild our homes. We have no money to meet up,” he lamented.

Before the flood, he was off the poverty line feeding his family and meeting their needs including living in a six-room mud house. He would want to get back to his self-reliant level but that can only come if rescue comes his way.

Freedom Sylvanus captures it better. “We need financial assistance. With money we can meet everything”.

Christian Ogalanya from Obuama had eight farms and four children. Unfortunately, he did not retrieve anything from the angry flood. He simply stated, “We need help”.

Pregnancy is a difficult state to be caught up in an emergency state. Two pregnant women that this publication spoke to are not finding things easy.

Confidence Blessing is from Ohoda Community; mother of two and seven month pregnant, hunger is a threatening guest. She is also too financially handicapped to access healthcare services. She said she was registered in Oyiba Community Health Center, an impacted community.

Blessing Daniel from Ubio is six months pregnant and has also not been able to access ante-natal care from the camp.

Monday Princewill Evergreen who introduced himself as a representative of the Ekpeye Central Flood Committee at the Akoh District Office Camp explained that the camp, converted from the Federal Road Safety building is hosting IDPs from Oyigbe, Amanikpo. Ebrass, Olokuma, Ubio, Ihuechi, among others. It has about 100 IDPs.

He said relief materials are being distributed from the Central Committee to all camps and individuals.

He noted that the sanitary condition at the camp is not too good but a medical team is moving from camp to camp.

He said the bulk of relief materials received so far came from Total Energy and Mobil and the Eze Ekpeye Logbo Central Committee.

Monday called on the federal and state government to help the flood victims. And 48 year old Pat Goodluck Ezekiel from Ebriba, Ahoada West, a farmer with six children said the extent of damage is huge.

“The flood damaged farmlands, houses and people are homeless. Many houses are down, people sleep in the market, open places, church fields with mats, under canopies; on concrete; some use plantain leaves as cover. There is hunger, no road”, he stated.

Ezekiel wants urgent government intervention. “We want government to visit the villages affected, build us concrete houses even if two-two rooms, assist us with farmingimplements like cassava stems, plantain suckers, etc. after the flood. In the meantime, We also need mattresses, only three were supplied here,“ he stated.

Two very old women were spotted in their midst. One of them was sitting on spread-out sack bags and declared she was sick. She was lucky as the Kebetkache medical team was on hand to attend to them.

Mercy Akuanyoono who visited some other camps in Ahoada,also reported that people were facing serious hunger. According to her, in some places people stay from morning till evening without food.

She said: “Camps visited are Ihuike IDP Camp and Edeoha IDP Camp, all in Ukpata Kingdom in Ahoada East. The Ihuike Camp has displaced persons from Ahoada East and Ahoada West. They had some support at the initial stage but the support is now reduced.

“The identified challenges are: No food- it is insufficient if ever it comes; nursing mothers have sick infants. No baby food for their growing infants. They lack mosquito nets. Windows are open with no nets. The senior citizens are ill.

“There are no mattresses so they lie on the ground. A lot of them have developed cough because of exposure to the cold floor,”she reported.

The Kebetkache medical team told National Point that high blood pressure ranging from 150-170 and above, was recorded among many of the IDPs who assessed its services, most likely resulting from clear worries over the homelessness, poverty and worries over how to cope after the flood.

The IDPs from Emelogo and Adada communities are camped in the main Abua Local Government Secretariat and both men and women are camped together. Over 360 persons including children are registered as camping there.

At the old secretariat are IDPs from Ogboloma Community and others made up of about 240 persons including children.

Kiikpoye Mark of Abua-Odual Kukpe Foundation informed this publication that two women were down health wise as at November 3. However, the primary health care services are ongoing at Camp 1.

Abua IDPs appear to be better taken care of as the report is that they are receiving intervention from both government, political parties and civil society donors.

Access to Abua was made difficult as the flood made it difficult to get into Abua. Our team was forced to stop at the Seventh Day Adventist Orphanage at kilometer seven and handed over relief materials from Kebetkache to the Kupke Foundation there for onward transfer to the displaced persons.

According to Kukpe, a team led by the chief medical director of the Rivers State Health Management Board, Dr Okagua, the Rivers State Flood Taskforce, Hon Solomon Bob, member House of Representatives, the governorship candidate of Accord Party, Dumo Lulu-Briggs and Kebetkache Women Development and Resource Center, were among those who have visited and sent relief materials to the IDPs in Abua area. 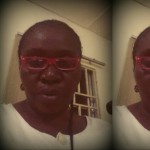 Bayelsa State Government Abandoned Us In The Camp – Comrade Eric

TEXT OF PRESS BRIEFING BY THE PRESIDENT OF THE IJAW NATIONAL CONGRESS (INC), PROFESSOR BENJAMIN OKABA, ON THE DESPICABLE ACTS OF LIFE-THREATENING POLITICAL VIOLENCE UNLEASHED IN IJAW LAND AMIDST CAMPAIGNS FOR THE 2023 GENERAL ELECTIONS HELD AT THE IJAW HOUSE, YENAGOA, BAYELSA STATE, ON SATURDAY, JANUARY 4, 2023.

2023 elections: women to march for peaceful polls in Lagos

The Petrol Crisis Must End In 2023