Governor Obaseki, represented by the Secretary to the Edo State Government (SSG), Osarodion Ogie, who, made the statement at the official launch of the HeForShe Initiative  in Benin City, said the concept of the launch is commendable and worth emulating. 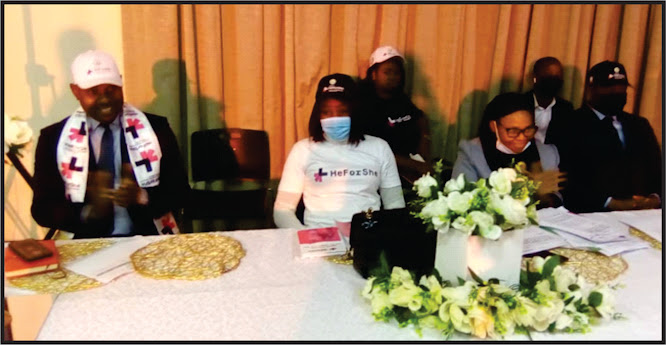 He disclosed that as a government the state has enacted a law that would put an end to gender inequality in the state.

“Let me thank the organizers of today’s launch of Edo State HeForShe solidarity movement campaign which, involves men and boys in achieving gender equality by taking out time to discourage negative gender stereotypes and behaviors initiated and being promoted by UN, through the UN- Women.

“This movement has been accepted globally. This is commendable and worth emulating.

“When women of good character are given leadership positions in decision-making areas combined with hard work, they often excel which leads to the development of the state and Nigeria in general.

“As a government, we have been putting structures in place to eliminate negative gender stereotypes and behaviors. This is why we passed the Violence Against Persons Prohibition (VAPP) Law 2021. Yesterday, the State Executive Council reviewed the new Criminal Code, which we forwarded to the Edo State House of Assembly this morning. Many of the outdated provisions will be reviewed. If we are able to pass that law, the case of incessant criminal issues would be a thing of the past in Edo State”.

According to the SSG, the law is geared towards improving organs for the protection of women and girls in Edo State.

“The law is expected to protect women and girls against rape and sexual assaults, and underage amongst other provisions. We have also taken deliberate steps to close gaps between men and women appointments into public service”.

He said more women are being brought on board decision making tables.

“In the last few days, we have made various appointments.

“Under this administration, the Edo State Judiciary has more female judges than men. Currently, we have 18 females Honorable Judges in the state.

“Compared to previous administrations, we have more female commissioners, more female special advisers and more female permanent secretaries. All these are part of the achievements of making Edo State great again”.

“We are in support of gender inclusiveness. No society will witness any development and improvement without involving the women in governance, ” Obaseki stressed.

In her opening remarks, the UN Women Representative in Nigeria and ECOWAS, Mrs. Comfort Lamptey, explained that HeForShe is a solidarity movement for gender equality developed by UN-Women to engage men and boys as advocates and agents of change in the effort to achieve gender equality.

“The central message for the HeForShe campaign in Nigeria is that gender inequality is not just a women’s issue, but a human rights issue meant to benefit both women and men socially, politically, and economically.

“The launch of the HeForShe Initiative in Edo State is very essential to the successful implementation of this project. This launch emphasizes the importance of outreach to strategic groups, men, young people, the media, the private sector, and other influential stakeholders on why the inclusion of men as allies will lead to the achievement of gender equality, the breaking of all stereotypes, and patriarchal norms in Nigeria.

“The aim and overall core of this launch are to strengthen male engagement and advocate for the elimination of all forms of violence against women and girls in Edo State through the HeForShe initiative launch which is a key deliverable of the Spotlight Initiative.

“UN Women, under the Spotlight Initiative in partnership with the Government of Edo State has found it important to launch this initiative at a critical time in Nigeria where gender inequality is widespread due to patriarchy, imbalance in socio-economic opportunities, cultural and religious factors and inadequate enabling legal and policy frameworks, among other factors.

“The government and other stakeholders in these states, are going to get committed, including traditional and religious leaders, heads of security agencies, civil society organizations and gender advocates, to contributing to the attainment of the set goal for the movement,” she added.

UN Women, Nigeria has partnered with the government of Italy and Edo State to implement a project on ‘Preventing Forced Migration and Trafficking of Women and Girls in Nigeria:

Building Resilience, Promoting Sustainable Development’, with funding from the Government of Italy. The programme is being implemented in Edo and Lagos states.

In her goodwill talks, Edo state First Lady, Mrs. Betsy Obaseki, represented by the wife of the deputy governor, Mrs. Mayrian Shuiabu, urged Edo women to strengthen, develop women’s skills and build their capacity to enable them withstand the plights of life.

She pleaded with men and the youths to join the women in the campaign for equity.

Ladies Let’s Speak With Our PVCs In 2023