As some Nigerians celebrate the passage of bills permitting amendments to the provisions of the 1999 Constitution of the Federal Republic of Nigeria, it is tears of frustration, disappointment and deflation for Nigerian females, activists and non-activists as well as surprise and pity from development partners. 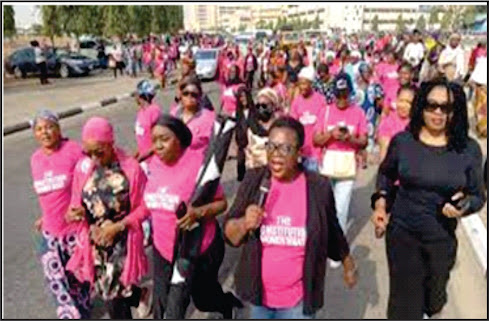 Hopes had been high that with an opportunity for constitutional review and amendment by the 9th National Assembly, issues of poor representation of women in political and public decision making positions, indegenship for their foreign husbands, the long demanded 35 per cent affirmative action and other gender concerns would be addressed but the Assembly on Monday March 1, rather than help Nigeria push down barriers to women inclusion, handed them a bag of sorrow.

While the world is pushing for 50 per cent inclusion of women in governance, the legislators they fought to bring on board in government rather than affirm 35 per cent as benchmark for appointing women into political office, slashed it to 20 per cent; this in a country where governance has gone haywire with brides being kidnapped and women abducted and raped at will by humdrums acting above the law.

March 8 is the International Women’s Day. While countries will be celebrating progress, Nigeria will have a no progress report.

The women and others championing the gender equality cause have soundly rejected the NASS position and are calling for a return of the bill for quick positive representation. Protests heralded the rejection of the bill as women occupied the NASS to send home their message.

A statement collectively issued by the women in Abuja immediately after the NASS voting, March 1, 2022

“Women’s Statement On The Rejection Of Gender Bills By NASS

Nigeria women are disappointed and aggrieved at the actions of the 9Th National Assembly(NASS), today Tuesday March 1, 2022 when they denied women the opportunity of inclusion and representation in governance by voting against the gender bills. The NASS has spoken loud and clear that they do not want progress for society: for mothers, aunties, sisters, wives and for daughters.

It is particularly sad that in a month globally dedicated to celebrating women worldwide, our NASS has chosen to deny women basic human rights.

These are Bills targeted at addressing the current gender imbalance across the legislative arm of governments across the country whilst reducing the under-representation of women in political office.

The men of the 9th NASS have reinforced the discrimination and political bias against women as enshrined in the 1999 Constitution by:

Denying citizenship to a foreign-born husband of a Nigerian woman (while it allows Nigerian men’s foreign wives to be awarded automatic citizenship).

Denying 35 per cent appointed positions for women and settling for 20 per cent.

Denying specific seats for women in the National Assembly.

The men of the 9th NASS by their actions have taken us backwards.

Their actions undermine the importance and relevance of women’s contribution to the governance of Nigeria including, the key role women play to bring victory to political parties in elections at all levels across the country. They also voted against diaspora voting!

Nigerian women therefore demand that all gender bills be reconsidered. Ultimately, our demands will benefit not just women but Nigeria as a whole. More women in governance will only bring progress and respect for Nigeria in the committee of nations. We cannot in 2022 be negotiating the rights of women and the sanctity of the dignity of girls. We call on the National Assembly to re-present these bills as a matter of urgency and ensure that they are passed”.

Although Nigeria is supposed to be a frontline African state, in terms of gender balance, she falls very low in the equity scale with countries like Rwanda, Ethiopia, Kenya high in female gender representation in political office.

While Nigerian women inched closer the 35 per cent affirmative action goal under the Goodluck Jonathan administration, those gains have been lost in the current administration with female representation in elected offices dropping to ….

Action Aid Nigeria in one of its posters decrying the rejection of the gender bills stressed that there can be no progress without equity for a population that is half the number of citizens in the country.

The rejection did not come as a surprise to many as there had been repeated though individual statements from NASS that the equality representation drive will not fly because it is considered to be against certain traditions and religions especially in the north, the axis that controls a larger segment of the legislators.

Gender analyists say Nigerian women have got to revisit the drawing board for a more workable strategy.

“A group that constitutes 50 per cent of the population cannot accept being treated with the level of disdain exhibited by the NASS members. It is time to draw up another more practical strategy. Checkout what women in South Africa, Kenya, Rwanda did to get where they are and push again. I expect a national reaction-market women, young girls, old women, everybody rejecting this slap.

“Every woman and girl in this country must be told what this mass rejection means so as to get them to identify and cue behind the push to come. If our grandmothers were able to force the colonial masters to respect women and do the needful, with all at our disposal today, there is no reason why we cannot get the rights we deserve”, Chief Constance Meju, coordinator Center for Media Environment and Development Communications stated.

Ladies Let’s Speak With Our PVCs In 2023