The Nigerian economy is on its knees. The people are bleeding and the government is seriously overwhelmed both by debt, lack of vision and ever increasing insecurity. Everywhere you turn the people are in a state of unease-worrying over their safety, state of finance or future of their children.

For the first time in Nigeria’s history, schools were shut to stem the ravages of bandits who have seen in school children, an easy well of wealth. Travel has also become a source of worry as bandits reign supreme on the highways mauling lives and raping women and girls without care. The rich can now only fly or travel by train leaving the ordinary citizens to either sit tight or face harsh realities on the roads especially, in the North. While government constructs wooden pyramids decorated with scant bags of rice to claim a boost in rice production, the real farmers cannot access their farms because bandits have occupied their territories and are forcefully collecting huge levies to allow them access and to harvest their crops.

Expectedly, there is food scarcity, high cost of food, impoverishment, deprivation, more stress for citizens even as the government churns out statements claiming to be on top of the matter, announcing release of huge security allocations which effect do not match the hopelessness evident.

From the South South, youths after patiently hearing for years that government plans were in the pipeline and seeing nothing, faced with the effect of the harsh economy, ever rising demands on education by unscrupulous administrators and lack of opportunities to positively express themselves and contribute to national development as their counterparts in other climes, decided to find work for their itchy hands in the same pipeline (oil).

Smart kids, they discovered that the Nigerian government has made crude oil refining a big deal for lining the pockets of godfathers and political cronies with dollars under the guise of subsidy, an ever unending waste pipe, so they keyed in to fill the need gap created especially in their localities for oil host communities were least served by the subsidized oil products. Nigerian homes majorly rely on  kerosene for cooking while heavy duty machineries that promote production and communication, key employment sectors, operate on diesel yet these two products have been in serious short supply from the NNPC. According to research, diesel has not been produced in the last 10 years. Failure to address these needs provided a comfortable market for the oil bunkering menace. Interestingly, research by Stakeholder Democracy Network, SDN shows that the quality of some the locally refined products are actually better than the ones government is raping the economy to import. A whooping N3trillion is the demand for importation for this year despite claimed reduction in subsidy by this and earlier governments. Surely, something is wrong somewhere!

This local refining has brought to the fore, the abundant employment opportunities and multiplier effects this business if well structured, can bring in a region populated by a high colony of energetic youth whose fathers’ lands have been shared out to oil sheiks so appointed for doing nothing.

Such injustice cannot continue, for it has turned the region into a careless mining field sucked dry by greedy law enforcement agents, creating serious health and environmental hazards that raised the huge cries against the massive soot in the air and the consequent efforts of the Rivers State government to clampdown on the operators. Something more than the clampdown needs to be done.

Vice President Yemi Osibanjo in the early days of the Buhari administration did consent to proposals for modular refineries without much result and now, the call is for cellular refineries to harness the skills on ground and create better local economy. It is believed that a network of cellular refineries can create a reasonable industry to accommodate the worrisome population of unemployed youth in the region. Regulated, well planned and properly monitored system will increase needed federal revenue and may be the catalyst needed for transformation of the Niger Delta. This should be done fast to curb crimes and make the most of the liquid gold before global attention finally shifts.

It is important also to note that failure by government to articulate and plan for the future has led to an abuse of the education system resulting in growing alienation of our youth. Everywhere they turn they see and read of massive looting in governance with offenders being rewarded rather than chastised. 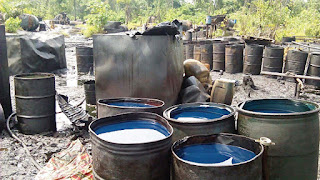 Taught that impunity can be read as bravery, they are turning their unguided intelligence towards fraud. As we have become careless with materialism, Yahoo or internet fraud has become the song of our youth to the shame of the nation. Many are abandoning school to join this disastrous trade and the future of Nigeria is in real jeopardy.

We failed to show them the honest and enduring path. Our government is filled with men of questionable integrity and a country that promotes evil can only reap evil. Our leaders are not only destroying the economy and Nigeria, they have succeeded in adding to the burden of the world with a youth that is majorly off focus. The world thrives on accountability, good planning and public interest but, the reverse is the case in Nigeria.

The game over fuel subsidy, the silence on promised reforms in response to ENDSARS all point to deficit leadership.