Our Dear Governor, Your Excellency, we hope this letter meets you well. Forgive us for passing through this medium to reach you. You left us with no option due to the need to avoid the bureaucracy of your office that has not helped you or the state in the last six years.

We have decided to write you because of some actions of yours which has proven beyond reasonable doubt that you had only one aim as Governor; the final destruction of the Peoples Democratic Party, PDP, in Akwa Ibom State, with your insistence that your successor MUST be Pastor Umo Eno. 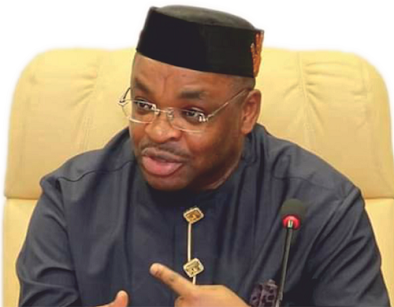 Your Excellency, please for once be honest to yourself and search your conscience. If you were not even a Governor and someone else who was Governor was prepping up a character like your Commissioner for Lands and Water Resources, would you have supported such a cause? Before now you had bragged that your successor will be someone with an International email address, someone the world listens to and respects, someone who is globally recognized. And we wonder, how does Pastor Umo Eno fit into this?

It is sad that for more than six years, Pastor Lawrence Achudume and your step brother, Mr Gabriel Nkanang has been the ones controlling your psyche with prophesies that has done more harm than good to yourself and the future of the state. That Pastor Achudume is the one bragging that he made you Governor by prophesy and that he is the one who will choose your successor, presents a sad tale of how far you are ready to allow your executive carelessness ruin the PDP, a party we all laboured to form since 1998 when you were nowhere near politics of Akwa Ibom State.

Dear Governor Emmanuel, come to think of it, with your obsession with Achudume’s prophesies on who will succeed you, we are tempted to ask: Are other brother Governor’s of yours having this same fixation on waiting for God through a prophesy from an old school mate before they announce their preferred candidate? Other Governor’s who are not waiting for prophesy, are you saying it is the Devil that will nominate a successor for them? Why have you allowed your step brother, Gabriel Nkanang and Pastor Lawrence Achudume ruin you and put the future of the PDP in jeopardy with fake prophesy of God wanting Umo Eno to be your successor?

Even though you may not have been an active political participant before 2014, one would still give you the benefit of the doubt that you were old enough to remember that a state like Cross River was doing massively well in terms of tourism but all such legacies of former Governor Donald Duke are today history because of a wrong succession plan. Is that what you want for Akwa Ibom? To allow your step brother and Pastor Achudume ruin your legacies and kill the party in the state?

Remember, Akwa Ibom PDP delegates after collecting so much money from Attah including his Exco members revolted against Obong Attah because of his family interest in his succession plan and voted in Akpabio who came in and abandoned over 80% of Attah’s key projects. Is that what you want for yourself with Umo Eno? Or are you ready to administer oath (Mbiam) to people in order to produce a successor? Is history about to repeat itself?

Enough is enough! Akwa Ibom must not be turned into a comedy show where soothsayers determine who will govern them against all modern norms. Kindly pull the brakes and put a stop to this madness before you destroy the gains of your administration. Most importantly, stop this madness that is capable of bringing the uninterrupted reign of PDP to a sad end in Akwa Ibom by 2023 if you refuse to listen to advice.

As you’re about to unveil Umo Eno as your successor to the Fathers of Faith, Traditional rulers and other Stakeholders in the state, are you saying Akwa Ibom Clergymen such as Prelate Sunday Mbang, Pastor Ntia Ntia, Archbishop Cletus Bassey, Bishop Emma Isong, Bishop Udeme Simon, Pastor John Linus, Rev Uma Ukpai, Pastor Angela Ashong, Prelate Isiah Isong, Rev Patrick Edet, Apostle Nyenneime Andy, Apostle Akan Weeks, and many other great men of God from the state incapable of hearing from God and will have to be relying on Pastor Lawrence Achudume and one unknown pastor from Brazil for prophesies from …That same God”?

In a state that has produced the likes of Obong Victor Attah, Chief Godswill Akpabio, and yourself, how do you feel wanting to hand over to Umo Eno, a man with pre-colonial mentality and far below the already established standard in Akwa Ibom State since 1999 till date? What happens to the likes of Mr UdomInoyo, Mr Akan Udofia, Onofiok Luke, Bassey Albert, Senator Effiong Bob, and many competent and qualified Akwa Ibom sons?

As Prince Enobong Uwah and Emmanuel Enoidem are going about bragging that whoever you bring will win because of their interest in Umo Eno, we want to let you know that Akwa Ibom people will shock you as you watch in agony the state slip out of your grip because of your refusal to look beyond family. It is sad that you are about to make the same mistake Obong Attah did in 2007 that brought Akpabio to power.

Save yourself and save the PDP in Akwa Ibom from iminent collapse before it is too late, except your goal from the beginning was to see to the destruction of the PDP. Halt this Umo Eno madness that has enveloped you. If it is a spell, get rid of it before you plunge the party into crisis. A word is enough for the wise.

We also call on the PDP State Chairman, Rt Hon Elder Aniekan Akpan, to note this incoming danger and ensure he maintains the peace and unity in the party by creating a level playing field for all aspirants in the spirit of justice, equity and fairness so that at the end of the day, justice will not only be done but would have been visibly seen to have been done. The Chairman owes the party that responsibility of ensuring that the PDP go into the 2023 elections as one big, strong and united family.

We are the founding members of PDP in Akwa Ibom State and we are ready to take the party back. Excellency must count.

Jonathan Is Not APC Member – Otiotio