Stolen Benin artefact now worth 2.5m were handed over to the Oba of Benin, Oba Ewuare 11 by the Nigerian High Commissioner to the United Kingdom, Mr. Tunji Ishola on behalf of President Muhammadu Buhari.

No fewer than 10,000 artifacts were said to have been looted from the Benin kingdom in 1879 and scattered across different parts of the world. 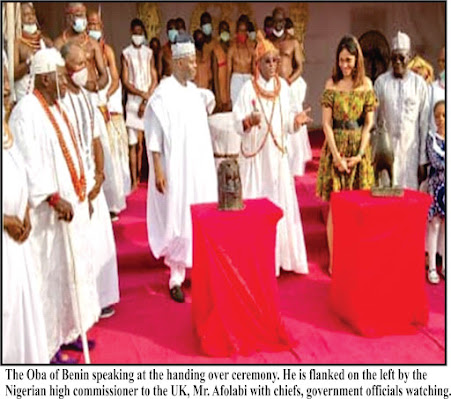 The returned artifacts, comprising a cockerel and an Oba Head were repatriated from Cambridge University, Jesus College and the University of Aberdeen, Scotland respectively.

Formally receiving the artefacts in Benin, Oba Ewuare II, whose speech was delivered by Prince Aghatise Erediawa, said the bronzes transend mere art, and are, “mostly of religious significance to us and these two bronzes will return to where they rightly belong”.

Extoling President Muhammadu Buhari for taking keen interest in the repatriation of the bronze, the Benin monarch appealed to those who are “genuinely interested” in the cause to join  the campaign in the interest of peace, tranquillity and the substance of our cultural heritage.”

Mr. Ishola said he was directed by President Muhammadu Buhari to formally and directly hand over the artifacts to the Oba, emphasizing that the artifacts are collectively values at £2.5m.

“I am given just one assignment to do here by the president of the Federal Republic of Nigeria, President Muhammadu Buhari, and the assignment is very simple-. to directly hand over the artifacts to the Oba of Great Benin Kingdom. This is the presidential directive.

“I want to thank the British Government for preserving the artifacts to still be in the same form they were when they were taken in 1897. Not only that, value has added to these artifacts; as at today, the Cockerel is valued at £2m in Great Britain and it is brought back here. Oba Head is also valued at £500,000 in Great Britain, and it is also brought back here. We are still working to make sure many of them come back home,” he said.

Director-General, National Commission for Mosuem and Monuments, Prof. Abba Tijjani said he was making efforts in his capacity as the DG to make sure artifacts, not only Benin’s but Nigerian are returned.

Edo State government, Governor Godwin Obaseki, represented by the commissioner of Local Government and Chieftaincy Affairs, Monday Osaigbovo, advised that they should liaise with the Oba of Benin to ensure the return of other artifacts to the palace of the Oba of Benin.

Jonathan Is Not APC Member – Otiotio