A routine check of elderly persons in Abonnema, was reportedly attacked while on a visit to beneficiaries of the O.B Lulu Briggs Foundation care programme for the elderly. The attack which occurred January 5, 2022, was reportedly carried out by a disgruntled man from the community.

Investigations by National Point indicate that the team of four persons in an 18 seater bus including the driver, a male doctor and two nurses were set on by a man and his accomplices. The man said to be from the Briggs family, reportedly works as a security guard in the new extension in Abonnema. 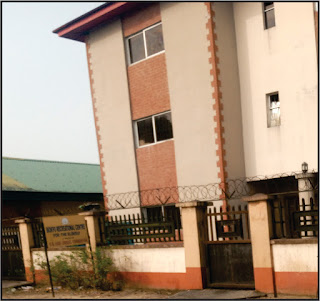 The welfare team which arrived Abonnema from Port Harcourt, was in the process of visiting some resident registered in the programme to supply medical items to the elderly in their homes, on January 5th, 2022 when they were attacked by one Mr. Isobo Briggs (a.k.a, Daddy Match), a man in his mid-30s and his accomplices. Our findings indicate that, the said Daddy Match, a father of one who cohabits with his girlfriend in Abonnema was angry that Mrs. Sienye Lulu Briggs, of the foundation is his sister and that, she has not provided the needed support for him that he needed her attention by carrying-out the attack. Our correspondent gathered that the suspect and his accomplices, tore the clothes of the medical personnel, damaged and siezed some items belonging to the team including, mobile phones, cameras, and other items. It was noted that Daddy Match and his gangs also damaged the bus carrying the medical personnel. In an effort to see the damaged vehicle, one of the caregiver at the centre Mr. Alaba Walter indicated that the said vehicle, an 18 seater Hiace bus had been removed from Abonnema.

When asked if the attack was sponsored, an eye witness who works as a caregiver claimed that, ”Daddy Match appeared not to be sent by anyone to perpetrate the evil act because, he was heard shouting that he is carrying out the action to attract Madam Seinye’s attention.  He added that, the said ‘Daddy Match’, was shouting, ”Seinye is his sister and that he has been working for her and that the things she had been sending to him are not getting to him, he must carry out the action.’’

Another eye witness who pleaded anonymity said, “he was shouting angrily that the work being carried out by the non indigenes in the vehicle, should have been given to him to empower him’.

About 21 years ago, the O.B Lulu Briggs Foundation built a welfare haven , the Biokpo Recreational Centre for the elderly in Abonnema, Akuku-Toru Local Government Area which has become a source of careto many elderly persons in the community.

Before the COVID-19 pandemic, over 300 registered beneficiaries and unregistered elders visited the centre daily to take home various food items as well as receive free medical checkups, treatments including free drugs. The Biokpo Centre was known to be a home where many elders met to play, eat and get free daily medical routine checks.

The said Isoboye Briggs fled Abonnema since the day of the incident in fear of arrest.

A visit by our correspondent to the Abonnema Police Station did not yield any outcome as the correspondent did not meet any official disposed to providing information on the matter including the DPO of the station.  When contacted, Tuesday, February 1, 2022, Police Public Relations Officer, Grace Oringe-Koko stated that she was not aware of the attack on the welfare staff, ‘ I’m not aware of the said attack’.

Meanwhile, many elders in the community expressed a yearning for the return of the medical operation of the Centre, and all other services enjoyed by elderly citizens in the community before the COVID- Pandemic to reaffirms its value and importance to the people.

Speaking on the impact of the Foundation’s philanthropic work during the organisations 20th anniversary, in 2021 the initiator, Mrs Seinye Lulu Briggs affirmed that, ‘“since 2005, through 34 Free Medical Missions it organized, the O. B. Lulu-Briggs Foundation has provided high-quality health services, including surgeries, to 132,591 men, women and children in rural and semi-urban Niger Delta communities.