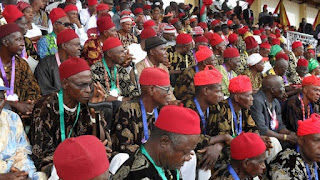 Ohanaeze Ndigbo Worldwide unequivocally stands with the 17 Southern Governors and any black leg among them will incur the wrath of history.Nigeria has two major groups of people. Those that cherish the corporate existence of Nigeria on one hand and those that do not value the unity, peace and progress of Nigeria on the other. The latter indulge in reckless nepotism, ethnocentrism, avarice, supremacist mentality, hollow expansionism and poor judgment of history. It is the law of nature that light illuminates and that in religion, both the Lord Jesus Christ and Prophet Mohammed stood for truth.Ohanaeze uses this singular opportunity to express disappointment over the unholy maneuvers and alliances by the members of the Peoples’ Democratic Party (PDP) to zone the presidential seat for the 2023 general election to Northern Nigeria. The exponents of this agenda, in their jaundiced calculations, believe that it is a sure way of regaining power from the All Peoples Congress (APC). Experience would have taught them that to zone their presidential position to the North is an orchestrated requiem for the party; because more PDP governors and grassroots will surely desert them. May I remind the PDP that the South East has made unquantifiable sacrifices for PDP beginning from the time of Dr. Alex Ekwueme. If by way of politics without principles the Southerners in PDP place their personal narrow interests over the interest of their people, the verdict of history will surely be harsh on them.Ohanaeze Ndigbo led by Ambassador (Professor) George Obiozor reiterates that the bane of Nigeria is raw injustice especially targeted against the Igbo and until we begin to wean ourselves of the Igbophobia and rather harness individual and group resourcefulness, creativity, ingenuity and initiatives wherever they are found, Nigeria will remain on the downward spiral.