Port Harcourt Polo Club is an exclusive, members only club. Although located in the now bustling ambiance of New GRA, a before now quiet  residential location, many people zip past the club’s sizeable green grounds dotted with  grazing ponies,club house and new viewing arena  with barely a glance on a normal day. After about two years of lull in activities imposed by the restrictions of the COVID-19 , the Port Harcourt Polo Club threw the 2022 year open with a week of tournaments, entertainment and award night to honour its patrons and founding personalities including King Alfred Diete Spiff Amanyanabo Of Twon-Brass in Bayelsa State. 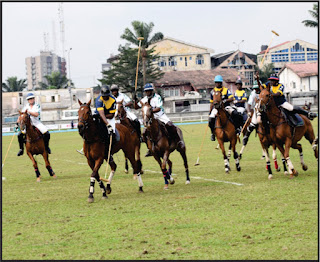 Diete- Spiff as the very young first governor of the newly created  Rivers State, along with men like Gen [rtd] Theophilus Danjuma, are credited to have led the push to birth a polo club in the oil city. That dream was made real in 1972, five years after the creation of Rivers State.

The Polo tournament attracted polo afficionados from clubs including Lagos, Ibadan, Abuja, Yola and Kaduna. An international flavour was added with the presence of polo players and followers from outside Nigeria.

The tournament featured several games that were nearly marred by rains on Opening Day Sunday, January 9, 2022 and a few other days, which led to players contending in penalty scoring contests rather than the heart thumping, pounding of horse hooves on the ground  and mallets swinging in controlled moves.

The Nigeria Navy trotted home with one of big trophies of the tournament, the TY Danjuma cup, while Kaduna Trappco went home with the biggest trophy of all, the King Diete-Spiff cup. It beat Abuja Cassiva/Dokaji and Port Harcourt based Strata Base/Solotone.

Other winners include Haske and William Team from Yola, while Funsho George captained the Lagos GDF Team to win the King TJT Princewill Cup.

In his remarks as the tournament drew to a close, Port Harcourt President Chukwudi Dimkpa stressed the fact that’ tourists from abroad and polo enthusiasts from other parts of the country attended this festival annually, attest to the immense tourism and social values of the exciting game of kings in the oil rich region and Nigeria’.

Cup Final: Liverpool Boss Jurgen Klopp Says He ‘Could Not Be More Proud’ After Beating Chelsea