President Muhammadu Buhari has tasked the Oba of Benin, Oba Ewuare II and the Benin Palace  on the safe return of two Benin  artifacts brought back from the United kingdom.

Buhari gave the task  in a statement delivered at the place of the Oba of Benin during the return of the repossessed artefacts to the Benin monarch.

“Our part is to ensure that these highly priced objects are preserved in accordance with global best practices. This will undoubtedly assist in the sustained campaign to return and repossess the remaining Benin artifacts and other Nigerian and African artifacts domiciled across the globe currently. 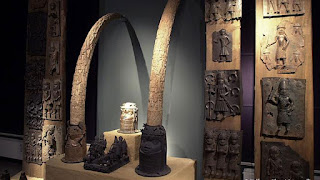 “I have the privilege to legally transfer the two repossessed Benin artifacts, the conqueror bronze statue Cockerel, “Okpa” and an ancestral head, “Uhunwun Elao” to the Oba of Benin on behalf of the president and we are also doing the legal transfer. “

He said the return of the two artefacts to the Benin Kingdom signifies a breakthrough in the desire of Nigeria and Africa to repossess African art work currently domiciled abroad.

Buhari advised that more emphasis should be placed on requests for the return of artefacts rather than the circumstances leading to their removal as the campaign for their return continues.

The ambassador further added, “My presence in Benin kingdom today is in fulfilment of the desire of the express directive from President Buhari to return the repossessed artifact to where they originally belong.”

He added that sovereignty is now vested in the president of Federal Republic of Nigeria by the constitution under President  Buhari who now transferred them to the palace of the Oba of Benin.

Responding, Oba Ewuare said the return of the artifacts,  which, coincided with his coronation and birthday anniversary signifies  a new era in Benin history and civilization.

He said contrary to speculations that the artefacts would be confined and kept away from public view, “there will be no restriction” as the palace is already collaborating with the federal government through the National Commission for Museums and Monuments (NCMM), to build the Benin Royal Museum to house returned artworks that will be opened to tourists, researchers among others.

The handover will douse tensions between the state government and the Benin Palace over where the highly valued artifacts would be returned to.

Obaseki Urges Youths Not To Give Up On Nigeria, Says Better Opportunities Await Them