THOUGHTS ON NIGERIA AT 61

The Institute of Human Rights and Humanitarian Law (IHRHL) is worried about the state of Nigeria 61 years after our colonial leaders handed over power and sovereignty to us.

IHRHL wonders what we should be celebrating at a time like this when a large part of the North is under siege by terrorists and virtually all parts of the nation are insecure as a result of the incapacity or outright unwillingness of the Federal Government and security agencies to tackle the Boko Haram Terrorists, Bandit Terrorists and many other terrorists in the north. However, the same Federal Government is doing a good job at curbing terrorism in the eastern part of Nigeria. 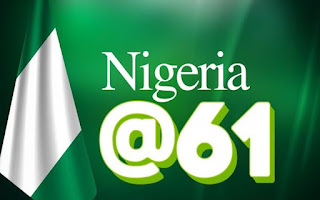 Allegations are out there that the Government of Nigeria is aware of the Financiers of most of the terror groups and some of them are officials of this administration but the Attorney General of the Federation and his master, the President, are doing little or nothing about such treason, which apparently makes us doubt the sincerity of the Muhammadu Buhari administration to tackle the crisis that has led to tens of thousands of deaths (both civilians and security agencies).

IHRHL has received oral allegations from soldiers who claim that high ranking officers in the Nigerian Army are benefiting from this state of insecurity due to the financial security votes and contracts associated with this war against terrorism. As such, it is in their interest to perpetuate it for their selfish gains at the expense of the nation, at the expense of the lives of its soldiers and citizens of Nigeria.

It is the considered opinion of IHRHL that the LEADERS of this nation are absolutely selfish and do not have the will and in some circumstance, the capacity to ensure the security and welfare of the people. The interest of the over 200 million Nigerians come after the interest of a few political leaders have been satisfied.

IHRHL wonders what the President, Presidency, Ministers, Governors and their Commissioners, Legislature and Judiciary, would celebrate when despite the noise about food security and infrastructural development, people are super hungry, super- unemployed, the value of the USD to Naira is 411.0904,  government intervention agencies like NDDC who ordinarily should enhance the livelihood of the people, are mere funnels used to siphon public funds into private individuals and political leaders who use such funds to advance their selfish interests and the political interest of the administration.

IHRHL is using this medium to further call on the AGF to use his office to prosecute everyone indicted by the NDDC FORENSIC REPORT. The AG must be aware that the world is watching to see if truly, the goal of this administration is to fight corruption or the reverse, given that even the present Minister of Niger Delta was one of those fingered as corrupt until he moved to the All Progressive Congress and was rewarded with that portfolio.

IHRHL urges Civil Society Organizations, International and Transnational Organizations and persons who love the good of humanity to continue to monitor the political leaders of this nation, continue to call out undemocratic actions, continue to challenge impunity by way of protests, media campaigns and litigations. We must continue to fight until we have security and good governance in this nation.

Finally, IHRHL prays that God will give us good leaders that will lead this nation to peace and prosperity in Jesus name. Amen

Obviously to larger extent, let me endeavour to narrow it down as it may involve some schools of thought, as a Social Justice Advocate, Nigeria’s narratives in terms of sound justice is gross corruption. An average Nigerian sees corruption as a talk show. What I mean here is, corruption in a larger mindset is not evil, they may rather twist it to achieve their vain purpose, etc. Even in some religious circles, they celebrate corruption. For example, someone who is a chaplain in a recognized organization, would like to be there because of the pay, not for the souls to be saved from their sins according to the word of God. Materialism has taken the bend of everything, what our people are after is the immediate gain, no more the fruits of the Holy Spirit. Where are the likes of Gani Fawehinmi (SAN.) of blessed memory?

From the Human Rights perspectives, may this be said from a humble heart; when I contested for the seat for Akwa Ibom South (House of Representatives) in 2003, it was a Moslem (Late Gani, SAN.) who fought to secure my ticket from the court at FCT, Abuja. You may ask me if I had seen him physically and the answer is a big ‘No!’ But he was defending the down trodden in the field of corrupt Nigerian politics! Part of how my ticket was secured. What am I saying? We need people who are willing to sacrifice their time, energy, resources, etc.to enthrone the truth against falsehood.

There is a current issue in Akwa Ibom State about where to site a seaport; with available records, you can see people in government trying to change the location, documents, etc., to accommodate their corrupt tendencies. The great question is, those people, how long will they live on this planet Earth? After their exit, where are they going to, is it to meet with God or Satan? Many of them may not consider this as crucial to their existence.

The fact here is that our so called leaders, or People of our time, are grossly inhumane. Can we approach this with sound understanding? How can a person desire to live when he or she is destroying lives on daily basis? That’s why we work very hard to enthrone a Trust Service to Humanity pursuit, where by, People should be humane under God; without the fear of God, humanity is useless.

It’s our place to note that, Nigeria @61 with such ill health, is a pointer to the fact that we need divine direction, intervention, etc.

My thought is more of solemnity, we need midnight prayers, more selfless service and any possible strategy to enhance humanity because we know, with God all things are possible. My humble narratives are on religion, social justice and strategic services under God. There is hope for Nigeria.

Pastor Dandy Ngbemena, Okwuzi, Rivers State: Nigeria at 61 could best be described as “A Failed Dream”

At Independence in1960, there was much optimism, hope and expectations in the new nation. And there was every reason for both dream and hope.

We had a young and vibrant work force most of whom had graduated from some of the best universities around the world. They have seen the development of other countries in Europe and America and had brilliant ideas about how a country should be.

Our politicians were very young and full of nationalistic zeal but over the years people have seen all these lofty dreams just rise and disappear like a vapour.

Today everyone is asking, what has gone wrong. Therefore Nigeria could best be described as a Failed Dream.

⠀I spoke to him on Monday, just a day before another human willfully took his life. We couldn’t have known it would be the last. We spoke about my mother, about the award being bestowed upon her the next day and how it was a birthday present from her to me. He asked after his newest grandchild whom he had given the name Mmesomma — ‘the one who does only beautiful things’. And above all, he bemoaned the state of things in the country. As a surgeon, always frontline with the people’s suffering, he shared just how visible the current hardships were. Patients, he said, were no longer able to pay for care. It didn’t help, he added, that no one was safe. I asked him if he was being safe and he assured me that he was, going on to share that he never went out anymore And was sure to be home by 6. Convinced, I reminded him to be even more careful and to take care of himself.

⠀If Ubuntu holds true, that he is — a son, a beloved father, a loving grandfather, a healer, a papal Knight, Agbalanze of Agulu, a friend, a brother, and so much more — then this is an invitation for us to find the good in us. We can choose a different path… this current one leads to more senseless death and pain for one too many.

A nation in pain

#A Nation in Pain

THOUGHTS ON NIGERIA AT 61

THE PROPHETIC DECLARATIONS FOR THE NATIONS!

Beyond Propaganda Against A Better Nigeria

The Philosopher King Delivers Damning Verdict On The Oil Thief

Sylvester Oromoni Vs Dowen College: The Curtain Draws Near

What Plan For Nigerian Youth?

Unacceptable Abandonment Of Governance For Politicking In The States

Rivers: Threading The Path Of Caution