Governors of the People’s Democratic Party, PDP, across the 36states of the country, national chairman of PDP, Senator Iyocha Ayu, members of the National Assembly, captains of industries and traditional rulers, were in Bayelsa State, Monday, February14, 2022, to witness the commissioning of the Ernest Ikoli Media Complex built by Governor Douye Diri. It was part of activities marking the celebration of his two years ‘Prosperity Administration’.  Speaking during the occasion, the governor, Senator Douye Diri recounted that some of the situations that made him to take the decision to put up the master piece were natural situations that affected all their media operations. 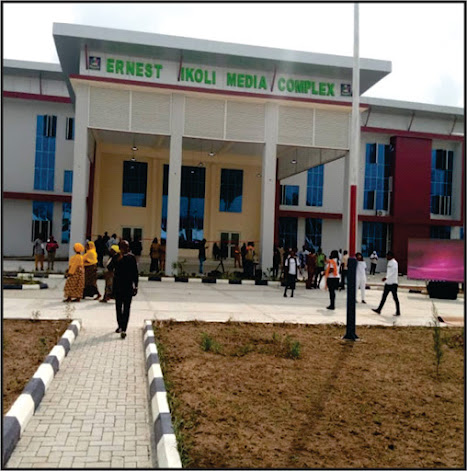 He recalled the day he was called that the State Radio Station had been taken over by storm, and the mast collapsed inside of it. He also noted the fire incidence that engulfed the whole of the studios, including the office of the general manager, adding that upon the pronouncement of victory of PDP by the Supreme Court, some overzealous persons came in and destroyed everything they could lay their hands on.

“And so, I took the decision to put every other thing to shape. And we decided and approved at the state executive council to begin the commencement of the building of this centre. 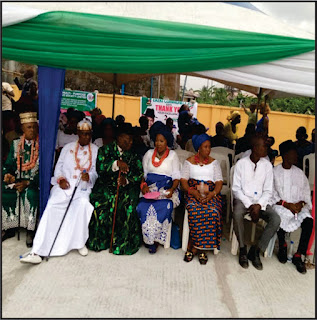 “Initially I was afraid that the job of this gargantuan nature shouldn’t be handled by an indigenous company. But, the more I visited on routine inspection, the more I fell in love with indigenous company. And so, let me commend Amapoupere Nig. Ltd for the timely and quality work that is delivered to Bayelsa State,” the governor stated.

According to Senator Douye Diri who is generally referred as the ‘Miracle Governor,’ “because of the history surrounding this complex, we looked at it, and from our State here, we had one of the very early journalists who even became the editor of the Daily Times, and whose contribution towards journalism and the media is acknowledged all over Nigeria.

“Therefore, we decided to name this complex, as you have seen there in the name of a veteran journalist who hails from Bayelsa State, precisely from Nembe, and he’s none other than the ever acknowledged Ernest Ikoli”, said.

The Governor stressed further: “This one of the humble efforts of your government, and indeed our great party. By the grace of God we’ll continue to deliver the dividends of democracy to our people, and to render service to our people. This is the first phase, the second phase is already approved, which is the equipping and installation of all equipment. It would be fully digitalized, it would be fully automated, and as we speak all furniture are in place”.

Earlier, the state commissioner for Information, Orientation and Strategy, Hon. Ayiba Duba, had recalled that a year ago, the governor, performed the ground breaking ceremony of the project which everybody has gathered to commission.

“The governor, on assumption of office, inherited all organs of the State Ministry of Information, Orientation and Strategy in bad state of disrepair. The buildings used by the Niger Delta Television, the Bayelsa State Newspaper Corporation and the Bayelsa State Broadcasting Corporation known as ‘Glory FM’, were nothing to write home about”, he said, noting that journalists who work for government were demoralized. Hon. Duba added that the governor insisted on a permanent solution that will guarantee value for money and ensure that in this generation, there would be no further need for investment in the media.

According to him, the Ministry of Information, Orientation and Strategy adopted what is called ‘Information Internalization’, which entails that government communication must target the immediate environment and the Bayelsa public first.

“The implementation of this policy also required effective and efficient media organs,” he added, insisting that, with this consideration, the governor demonstrated love for the media.

“Today, the first phase of this project, this gigantic edifice which consists of 248 office space, a library, conference hall, six studios, and ICT Centre, printing press, as well as a restaurant, will all house the Bayelsa State owned radio, television stations, as well as the Newspaper Corporation, which is now ready for commissioning”, he stressed.

The Commissioner thanked the governor for giving them the privilege to midwife the administration’s vision for ensuring that every financial resource required for the project was made readily available. He also commended Diri for his vision, work and commitment for a better Bayelsa State.

While commissioning the project, national chairman of PDP, Senator Iyorchia Ayu, expressed happiness and satisfaction over the achievement of Governor Diri, saying it takes a man of singular commitment to do so much in so short a time.

“Today, after only two years, we are able to come here and commission several projects. The governors of PDP work for the people, they don’t leave their states and stay in Abuja as some of those other parties’. Our governors are elected with a mandate, and that mandate is to work for the people that they govern, and that governance is service,” he maintained.

Ayu thanked the governor for giving service to Bayelsa State, as well as all the PDP governors across the country for making the party proud, adding that it is their work that is giving confidence to Nigerian people that PDP is coming back after being out of power for about six years now.

The PDP leader said his party is determined to fight for victory and that nobody can steal their victory from them. Senator Ayu further thanked Diri for giving him the opportunity to commission the Ernest Ikoli Media Complex.

With the Media Complex commissioned, all roads led to the Bayelsa State Boat Club at Osbourn Lake, where the PDP Ayu in conjunction with the host received about 5,000 decampees from other parties back to PDP.

There, the Bayelsa State PDP chairman, Hon. Solomon Agwana described the governor as a miracle governor sent by God to deliver the people of Bayelsa State. “Today, we are here to celebrate and honour our governor on his miracle second year anniversary, and to receive some of our returnees. Infact, when they left they realized they made the greatest mistake in the history of our political career.

“We are happy and thank His Excellency for the hand of fellowship he has extended to them on their return, and we hope they will work for the success of the party”, the chairman said, as he added that PDP is the only solution to the country’s problems.